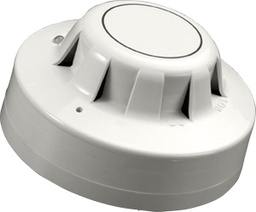 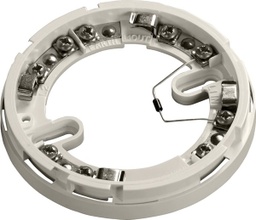 The Series 65 Optical Smoke Detector incorporates a pulsing LED located within the housing of the detector. The external detector moulding is identical to that of the ionisation detector, and has an indicator LED which is clear in quiescent state but produces a red light in alarm.

Series 65 incorporates well-proven sensing technologies, including an Integrated Circuit based on that used in XP95 analogue addressable detectors. The Series 65 range has a wide operating voltage of 9–33V and consists of ionisation, integrating ionisation and optical smoke detectors, four grades of heat detector and a range of bases.

The Series 65 Optical Smoke Detector has a moulded self-extinguishing white polycarbonate case with wind resistant smoke inlets. Nickel plated stainless steel wiper contacts connect the detector to the base. Inside the case a printed circuit board has the optical system mounted on one side and the signal processing electronics on the other. The sensing chamber is a black moulding configured as a labyrinth which prevents penetration of ambient light. The labyrinth has a fine gauze insect-resistant cover. The chamber houses an infrared light emitting diode (LED) and a photo-diode which has an integral visible-light filter as extra protection against ambient light. Every three seconds the LED emits a burst of collimated light, modulated at 4kHz. In clear air, light from the LED does not fall directly on the diode because the LED is positioned at an obtuse angle to the diode. When smoke enters the chamber, a fraction of the collimated light is scattered onto the photo-diode. If the resulting signal from the photo-diode is above a preset threshold, the LED emits two more bursts of light, this time at two-second intervals. If light is scattered onto the photo-diode by both these pulses – due to the presence of smoke – the detector signals an alarm state by switching the alarm latch on, increasing the current drawn from the supply from about 40μA to a maximum of 75mA. This fall in the impedance of the detector is recognised by the control panel as an alarm signal. The alarm current also illuminates the detector integral LED. A remote indicator connected between the L1 IN terminal and the –R terminal will have a voltage equal to the supply voltage less 1 volt across it and so will illuminate. To ensure correct operation of the detector the control panel must be arranged to supply a maximum of 33 Volts dc and a minimum of 9 Volts dc in normal operation. The supply may fall to 6 Volts dc in alarm conditions if a supply current of at least 10mA is available at this voltage. To ensure effective illumination of the integral LED and any remote indicator, the supply to the detector should exceed 12 Volts. To restore the detector to quiescent condition, it is necessary to expel any smoke and interrupt the electrical supply to the detector for a minimum of one second.

The Series 65 Optical Smoke Detector complies with the essential requirements of the EMC Directive 2014/30/EU, provided that it is used as described. A copy of the Declaration of Conformity is available from Apollo upon request. Conformity of the Series 65 Optical Smoke detector with the EMC Directive does not confer compliance with the directive on any apparatus or systems connected to it.

The Series 65 Optical Smoke Detector complies with the essential requirements of the Construction Products Regulation 305/2011/EU. A copy of the Declaration of Performance is available from Apollo upon request.

The Series 65 Optical Smoke Detector incorporates a pulsing LED located within the housing of the detector. The external detector moulding is identical to that of the ionisation detector, and has an indicator LED which is clear in quiescent state but produces a red light in alarm.